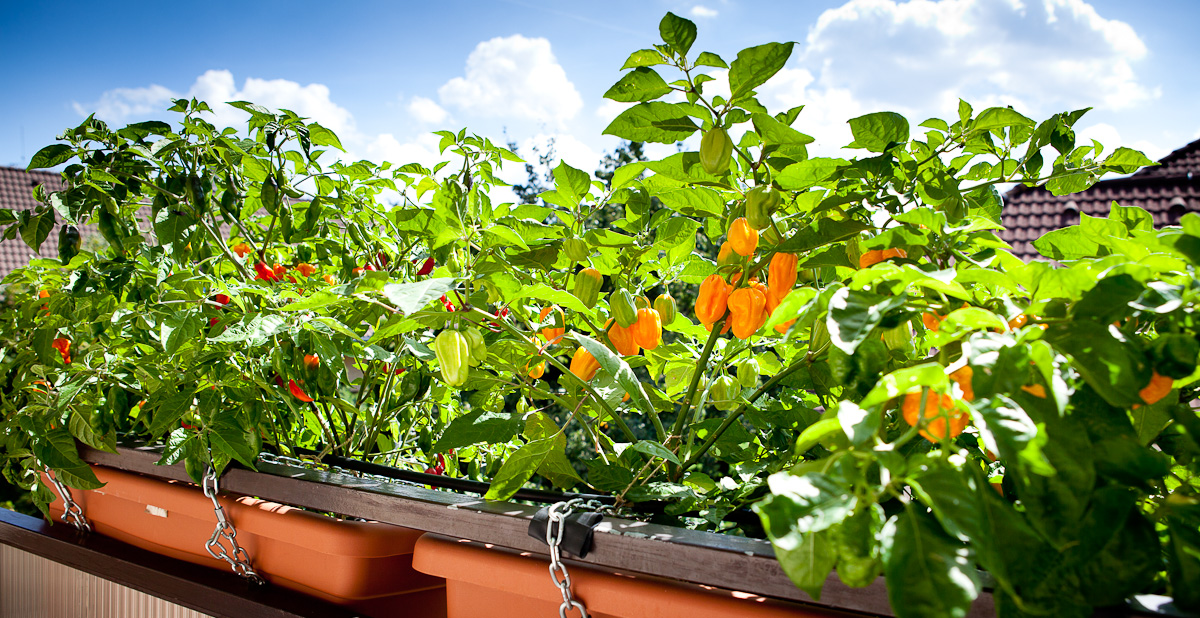 Another season is almost gone and with it came new improvements for my balcony garden together with new stuff I've learned.

I'm using 4, 60 liters big growing pots. Last year, I've planted 3 plants into each pot, roughly allowing 20l of substrate per plant. This year, I've potted only 2 plants per pot. This had a dramatic impact on the plant size and fruit yield.

I've kept the old substrate outside through the winter and reused it this year. I've manually cleaned it up, getting rid of all the old roots and found many Cockchafer larvae that I removed as well. I've then mixed the old substrate with pelleted horse manure, which doesn't smell that bad when dried, using 400g per 60 liters of substrate, together with smaller dose of BioBizz Pre-Mix Dry Fertilizer. This provided long-term slow releasing nutrition.

Great results with a new fertilizer

Last year, I used Chili Focus fertilizer during the whole season. It is a one component fertilizer, that is the same for all growth, flower and fruit stages. The only difference was the dosage, which was increased for the flowering stage. I thought the results were ok, until I found out how much better they can be.

This year, I've been using Kristalon - Healthy tomatoes and peppers fertilizer. It's a 2 component fertilizer, one component containing Calcium and Nitrogen only, and the other one all the other necessary macro and micro-nutrients. One component is used every week, altering them as you go. I've paid close attention to get the intervals and dosage right and it showed. Plants got much bigger, yielded much more fruit and leaves yellowing and drop were greatly reduced. I've stopped using the fertilizer for the last month before the final harvest to flush the fruit.

My balcony is south oriented and gets direct sunlight from 10am until 8pm, with temperatures reaching over 40°C. This was causing problems with plants watering as the hanging pots dried out through the hot sunny days, causing some very heavy wilting. I've build an automated irrigation system that waters the plants every morning at 5am and again at 9pm. The system is using a 60l water reservoir that holds enough water to last about 4 days. When I left for vacation I just hooked up more water tanks with hoses. It uses a variable water pump connected to Gardena Micro Drip Supply pipe, which has sprinklers screwed into it. It's operated by an automatic programmable power timer, which turns it on for 5 minutes in the morning and evening. Variable water pump lets you set the correct water pressure to get desired sprinkle area. Mine delivers about 8 liters of water to the pots during the 5 minute interval.